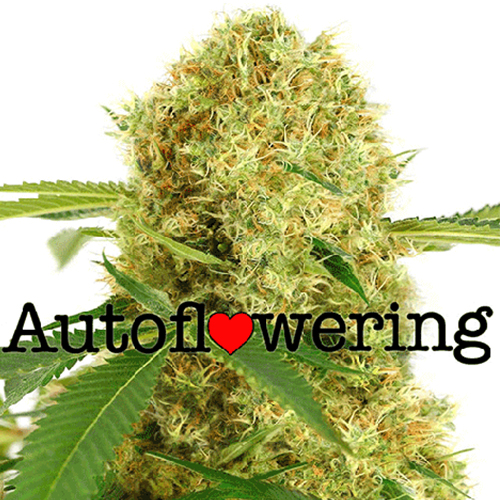 As an easy to grow hybrid that delivers light to medium yields, White Widow Autoflower will flower in 10 to 11 weeks from seed. White Widow Autoflower has an average CBD level of < 1 percent and an average THC level of up to 19 percent. Recreational users find her relaxing and euphoric, while among the many possible medical applications are the relief of pain and stress.

The White Widow Autoflower is a hybrid of the world-famous strain from the Netherlands. It’s a cross between a Brazilian Sativa and a resin heavy Indica from South India, and it was first bred by Greenhow seeds. White Widow has long been appreciated by recreational smokers and cultivators alike for its many qualities, which have stood the test of time long after being first popularized in the 1990s. Many visitors to Amsterdam will have encountered this strain over the years.

When grown indoors expect this strain to reach about 50 centimeters, while some larger specimens can get up to 100 centimeters. For an auto-flowering strain, yields are above average, usually producing around 40 to 160 grams per plant, depending upon the skill of the grower and environmental conditions, comparable to the original White Widow.

This strain has dark green leaves with plenty of widths and produces copious amounts of sticky resin. The White Widow Autoflower mirrors the characteristics of the original White Widow very closely while also only taking around 11 weeks to grow from seed to harvest.

The bud formations, despite their hybrid genetics, have a mainly Indica appearance in effect. The White Widow Autoflower has a sweet and sour citrus-like aroma and that familiar taste of old school ganja, just like the original White Widow.

It’s true that one of the first things you will notice about the White Widow Autoflower strain is the fantastic buds. They have an almost ethereal look along with their tasty and delicious woody smell. The buds are also really dense and compressed.

Parallels can be drawn between other old-school strains such as Northern Lights. The White Widow Autoflower strain is prized because when appropriately flushed, it doesn’t make you want to cough. Smoking brings with it a chilled out feeling, and it can help to improve the appetite. It also tastes great in a vaporizer. Very clean and fresh.

White Widow Autoflower is a relaxing and mellow strain. You can remain completely functional while still enjoying the calming effects of the Indica and the uplifting effects of the Sativa. Which is what many of us are looking for in a daytime smoke because not everyone wants something that’s going to blow your head off. Particularly If you’ve got stuff to do!

White Widow Autoflower may not be up there with some of the most potent strains, but it still ranks highly as a popular option for many growers.