Understanding the Differences between Sativa and Indica

Differences between Sativa and Indica: Cannabis is arguably one of the oldest known crops to mankind. History states that thousands of years ago, humans still used to cultivate marijuana. All through, two species, Cannabis Sativa and Cannabis Indica have remained dominant. Many hybrid strains have been built on these two species through cross-breeding. The differences between these two species have been a subject of much debate among users and scientists alike, fact that created the Indica vs Savita struggle between marijuana consumers. We will look at the differences in reference to the appearance, effects, and origins. If you want to find a trusted shop where you can buy great quality seeds click here.

This type of species has its origins in Africa, America and Asia. There has been a theory that tends to suggest that there was a common species that originated in central Asia before separating to Indica and Sativa. Others such as a French Biologist called Jean Baptiste Lamarck stated that Sativa had a European origin.

Cannabis Sativa is a tall plant. It can reach a height of 4.5 metres or even more depending on the conditions. This species has long branches with enormous distances between the nodes. These properties make it ideal for outdoor growth where it gives big yields. When grown indoors, it does not produce many flowers, meaning the yield is reduced. The leaves are long and thin whereas it has an expansive root system. It is also known to take more time before it starts to flower. This is usually ten to sixteen weeks.

When consumed, this species usually gives a zealous euphoric feeling. It will not hinder day to day activities when consumed. Instead, you will super active and creative in every activity you undertake. 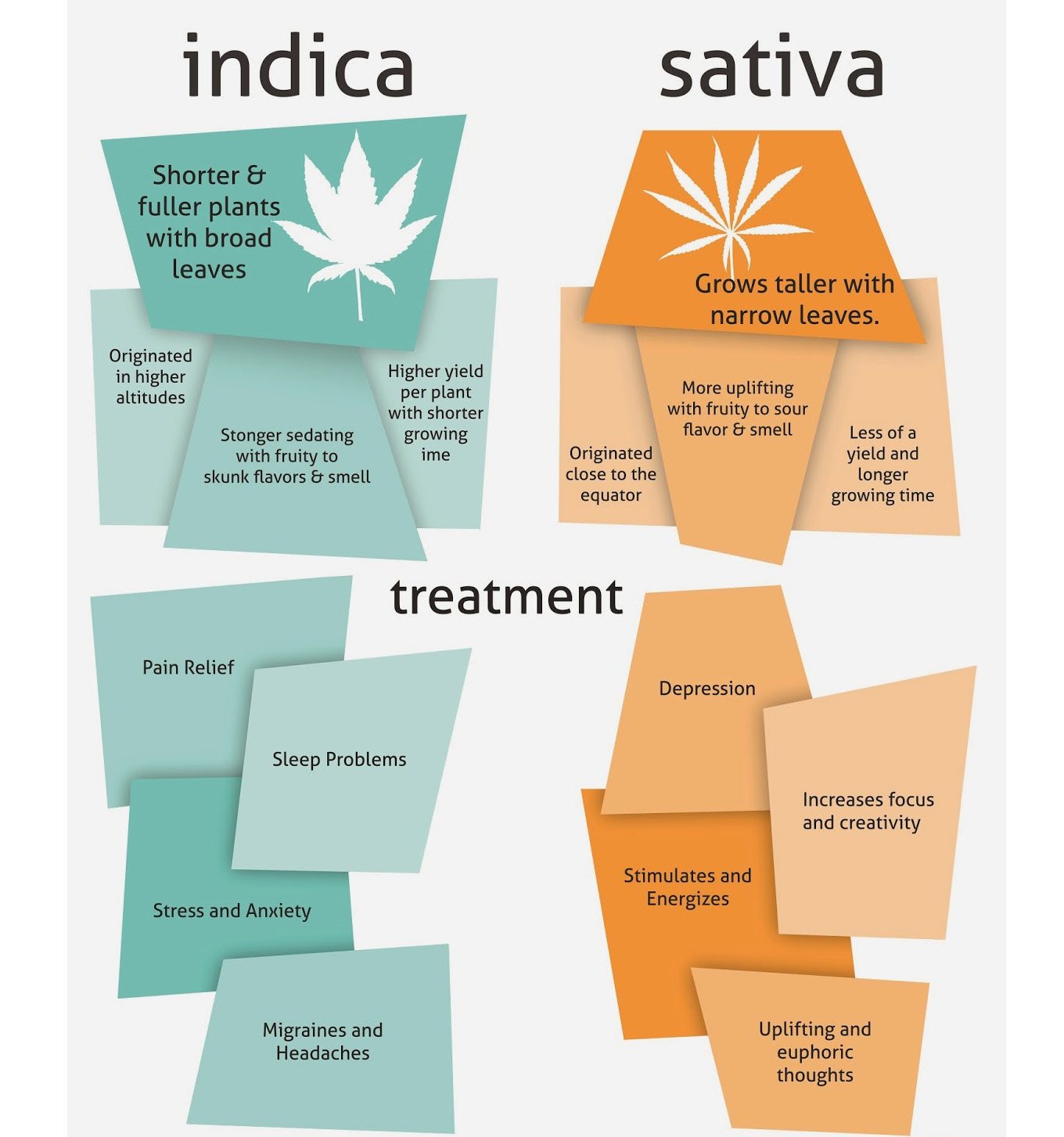 This species is believed to have come from Pakistan and India. It is a type that has found many uses in both recreation and medical use of marijuana.

Cannabis Indica is a small plant that has a compact nature. This makes it the ideal species for indoor growth. It provides for the necessary stealth required in the growth of cannabis. Its stalks are robust and has a condensed root system. The leaves are wide and dark green. It grows up to a height of 1.5 metres. It takes a short time to flower usually eight to twelve weeks. Indica is also ideal for all types of terrains. It can be grown in balconies and outdoors and maintain the same level of yield. It is resistant to harsh climatic conditions.

The Cannabis Indica is regarded as a ‘night time’ plant. This is because its consumption is recommended at night, preferably when you are about to go to bed. It has a narcotic high effect and leads to physical relaxing. It will give you a high feeling that is out of this world. That is the reason many say they feel like a huge, heavy stone slab on them. This species is also used for medical purposes.

The chemical composition of these two species is almost the same. However, Sativa has a higher level of THC while Indica has a higher level of CBD. If you want to try a hybrid we recommend you to check out the stardawg cannabis seeds. The basic point is that each of these two will make you high. However, knowing the differences is important so as to know which is best for you at which time and also the growth conditions favourable to you.