A DWC system is often considered’ hydroponics for beginners’ because of its simplicity in setup and maintenance as well as low cost. And yet later we shall examine one of the most cutting-edge hydroponic designs available that uses a deep water culture system for growing marijuana indoors.

The basic principle is quite simple though full systems can be quite complicated. A marijuana plant is grown in a nutrient-rich solution of highly-aerated water, preferably with an air gap between the reservoir and the base of the plant. 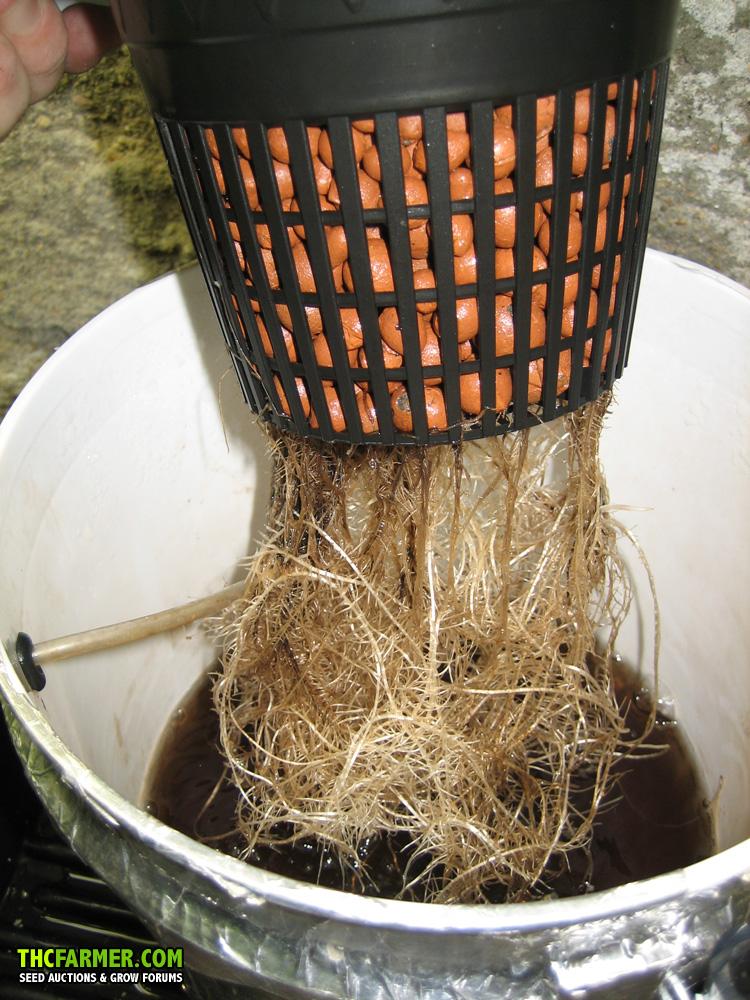 5 gallon buckets are the most common container used in growing weed because they are cheap, sturdy and readily available. Plastic totes such as Rubbermaid and Sterlite may be used as well. When using a larger tote, be sure to get a high quality one as the weight of the water can split the seams of cheap units.

Aeration is the basis of all DWC systems. It was once believed that most land-based plants would drown when submerged in water until it was discovered that adding sufficient fresh air (i.e. oxygen) would allow them to thrive. A standard aquarium air pump works fine. Buy one rated 4 times the size of the container you are using, so for a 5 gallon bucket, get a pump rated for a 20 gallon aquarium. Hook your pump to one or more air-stones and attach the air stone(s) to the bottom of your container with suction cups or silicone.  It is not necessary to turn your bucket into a wildly bubbling cauldron as the water has a saturation point as to how much dissolved air it can hold.  Small, evenly distributed bubbles are best.

It is important to note that cooler water can hold more oxygen than warmer water. Reservoir temperatures are best in the 55°F to 65°F (13º C to 18º C) range which also slows potential algae growth. For multiple linked buckets, a chiller may be necessary. For single buckets, some growers will freeze several one liter bottles of water and swap them out once or twice per day.

A 5 gallon (23 liter) bucket may hold from 1 to 4 plants. The more plants, the earlier you must veg them to keep them small and avoid overcrowding. With a single plant, you may grow as large as your space will allow.

A hole slightly smaller than the net pot to be used is drilled, cut or sawed in the bucket lid. The clone or seedling is placed into the net pot and filled with Hydroton or similar medium. 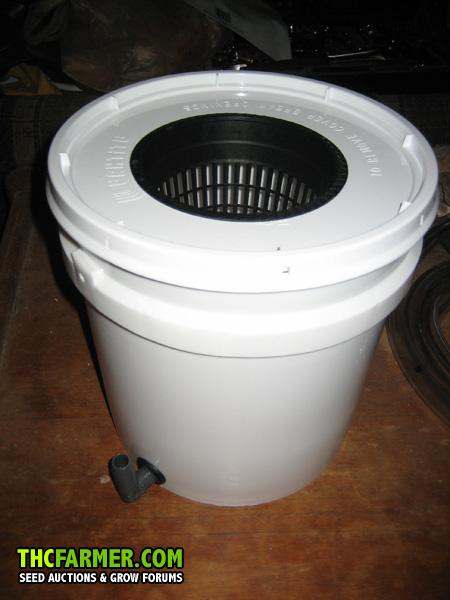 It is a hybrid of the standard DWC and a drip system. It was noticed that marijuana seedlings grew very slowly when placed in the inert medium until their roots reached the reservoir. The solution was to place a submersible aquarium pump in the bottom of the bucket and pump nutrient-rich water to top feeders and drip the solution over the young plants. This gave them a jump-start and has been shown to have a roughly 4-5 day advantage over a simple bucket.

These systems are the acme of the deep water culture system world. Multiple buckets are connected together in series and share the same reservoir. This eliminates the need for having to service each individual bucket as all regular maintenance is done to the reservoir. These systems generally have an air pump and aerator for each bucket plus one in the reservoir. A single chiller is used to keep the reservoir temperature constant; usually 10°F to 15°F degrees below room temperature.

A powerful submersible water pump uses negative pressure to pull water from the buckets and push it into the reservoir where gravity feeds the water slowly back to the buckets in an endless loop.

Square pails are generally preferred over round buckets to better fit the large 1.5” to 2” diameter plumbing. These types of systems are mostly used for growing very large bushes or trees.

A deep water culture system can be as simple or as complicated as you wish to make it for growing weed indoors.